In this issue, we explore changes to New York City's sculpture landscape over time—changes that can help us better-understand the story.

At the turn of the 20th century—a decade before the 16th Amendment would impose a federal income tax—80% of the U.S government's tax revenue was being collected through the Port of New York. It was past time for the city to have a United States Custom House building that spoke to its importance.

A site south of Bowling Green was cleared for the new structure, in an area then nicknamed Steam Ship Row. 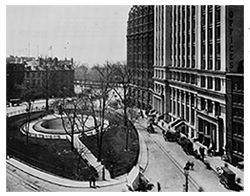 To this day, the structures lining Broadway call back to that era, including the New York headquarters of the Cunard Steamship Line and the offices of the White Star Line, where a crowd on the street would await news of the RMS Titanic. The cleared building site itself had quite a history: it was occupied by the Dutch-built Fort Amsterdam in 1625 and Peter Stuyvesant surrendered the fort to the British there in 1664. A new nation would build a mansion for its first president on that spot in 1790, within view of the George III statue's empty pedestal. 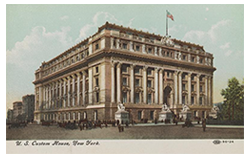 Architect Cass Gilbert wanted part of the building's sculpture program to represent nations that had "influenced the progress of the world by commerce on sea or by naval power." America could thus claim its place among the world's historical powers by honoring them on its own stage. 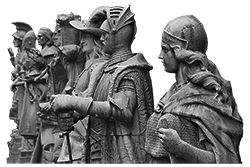 This type of themed "hall of fame" adorned a number of New York's new City Beautiful palaces, inspired by the White City of the 1893 Chicago World's Columbian Exposition. Three miles north of Bowling Green, the Appellate Division Courthouse of New York State was taking residence in its new Beaux Arts structure on Madison Square with an impressive sculpture program of its own. But where the new Custom House had its seafaring nations, the roof of the new courthouse was lined with depictions of lawgivers: 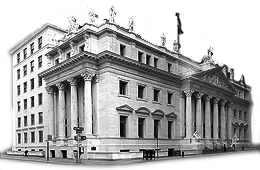 It stated that the thirty statues lining its east, north, and west facades were not portraits, but rather symbols of "factors that made certain periods in the world's history notable as stages in the development of civilization." The themed array comprises Indian Philosophy, Japanese Art, The Genius of Islam, Greek Lyric Poetry, Roman Epic, and 25 more.

Architect Richard Morris Hunt planned for four massive allegorical groups to grace the cornice of The Metropolitan Museum of Art, representing the "four great periods" of art: Egyptian (ancient), Greek (classical), renaissance, and modern. At the time, "modern" could have meant anything that came after the renaissance. Hunt's sudden death during the project muddied the understanding of his vision.

The resulting disorganization, along with budget constraints, left four 20-ton stacks of limestone blocks on its cornice, never to be carved. The Met's designations as New York City Landmark and National Historic Landmark mean that they will stay that way.

And then there is the actual Hall of Fame in the Bronx: the first place in America to be called a hall of fame. As the 19th century came to a close, three of the city's great universities looked to move uptown to a custom "Academic Acropolis." A learning environment on a hilltop. Columbia built its campus on Morningside Heights, City College of New York built on Hamilton Heights, and New York University, after an unsuccessful attempt to merge with Columbia, built its new campus on what is now University Heights in the Bronx. Stanford White's NYU Library design needed to address the site's steep slope, and White solved the problem with the construction of a terrace on a shear wall, topped with an open-air colonnade. NYU's Chancellor saw in the space an opportunity to honor "great Americans" selected by a national body of electors.

Even pantheons are subject to change.

Financial distress in the early 1970s forced NYU to retreat to Greenwich Village and sell the Bronx campus to the City University of New York (it is now the campus of Bronx Community College), but the Hall of Fame for Great Americans survives. It was meant to add honorees over time and now displays 96 portrait busts. Since its dedication in 1901, names have been added (e.g., Booker T. Washington in 1945) but also removed (Stonewall Jackson and Robert E. Lee in 2017). The Hall of Fame for Great Americans was designed to change, but the other "fixed" halls of fame described here have changed over time as well.

The Roosevelt Memorial has maintained its four naturalists, but the centerpiece equestrian Theodore Roosevelt was removed in 2020. Its hierarchical composition—Roosevelt on horseback towering over a Native American man and an African man—was called out as a symbol of historical racial injustice.

The Appellate Courthouse's sculpture of Mohammed—meant as a representation of Muslim Law—was removed and destroyed in 1955 at the request of the governments of Egypt, Pakistan, and Indonesia, citing the prohibition of graven likenesses of Mohammed in Muslim Law. Seven statues were shifted one pedestal to the west to fill in the gap.

Change would even come to the club of seafaring powers on the U.S. Custom House. During the first World War, anti-German sentiment forced the removal of German references from everyday American life.

During that era, The Germania Life Insurance Company thought it best to change its name (to The Guardian) and even sauerkraut was renamed "liberty cabbage." In that vein, the personification of Germany on the Custom House's roofline had its Teutonic ornament removed from its helmet and breastplate. A point was made to remove the term "Kiel" from its shield—the insignia of Kaiser Wilhelm. A replacement word chiseled onto the shield made the sculpture's identity clear: it was now a personification of BELGIVM. 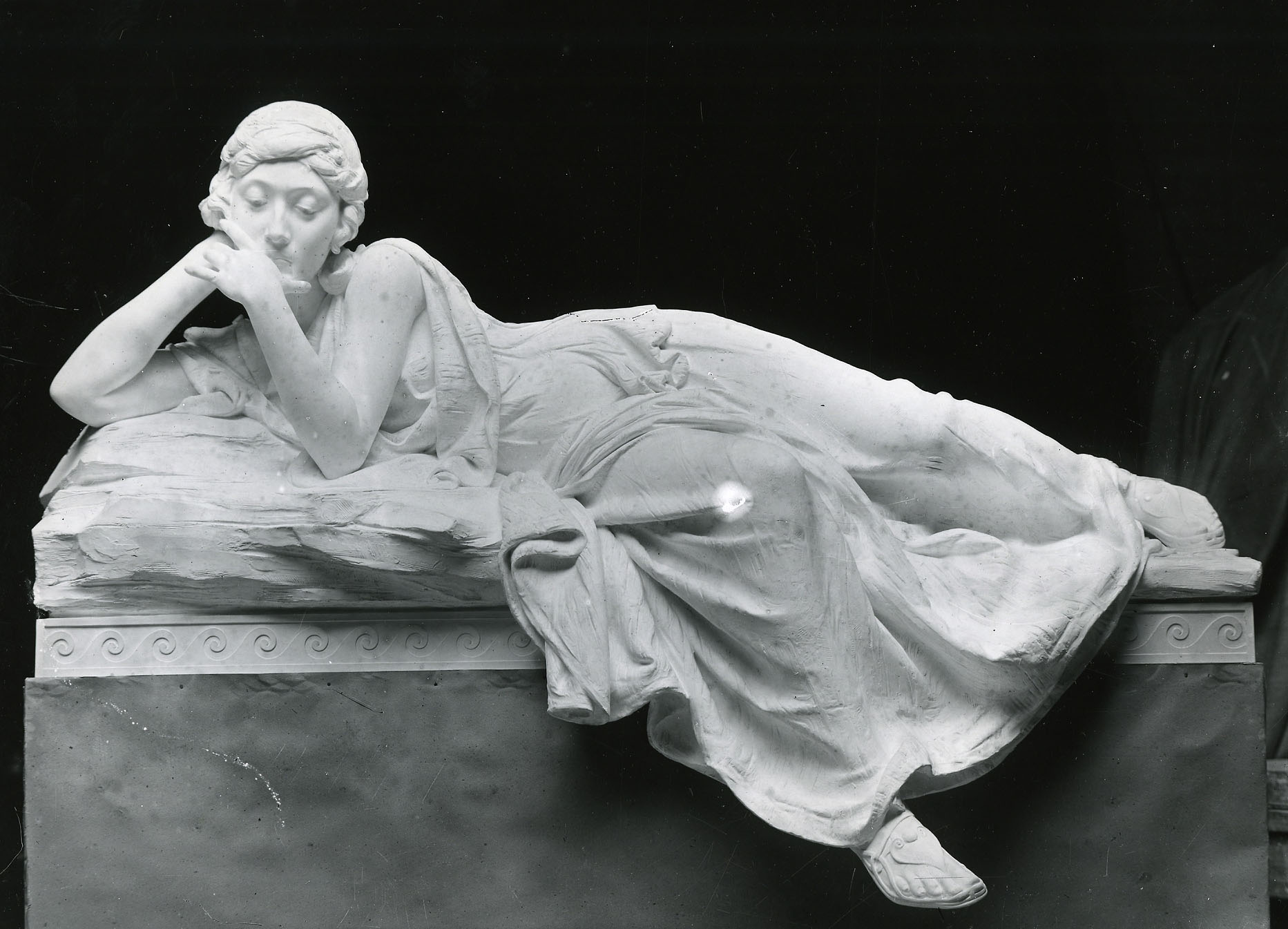 Memory is not a film: a frame-by-frame recording of how things were—that's not how the brain works. But you do serve as unconscious director and cinematographer... 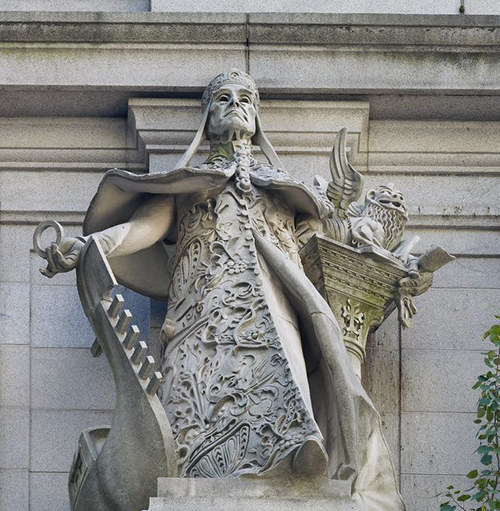 At the turn of the 20th century—a decade before the 16th Amendment would impose a federal income tax—80% of the U.S government's tax revenue was being collected through the Port of New York...

Treebase is an exploration of history and connections.

Starting in January 2021, we'll gather historical elements—facts, objects, events, people, and places—and add them as nodes to the site's database. We'll then connect those nodes, and generate data visualizations that can help bring history to life.